The student’s conclusion: Neither challenges nor confirms traditional gender norms

The book is about the three billy goats Gruff who are returning to the mountain farm. Here they are planning to buy waffles and frighten the troll under the bridge. When they arrive, nothing is as it used to be. The troll is in the old folk’s home and the café is closed. They decide to visit the troll and scare it back to the bridge across the stream.

This picture book is suitable for children aged three to five. The text and the pictures fit well together. They support each other, while the pictures also allow reflection on the content. This may help create conversation about the content of the book, which in turn may generate more involvement while reading the book. The book is based on and assumes familiarity with the well-known (for Norwegians) fairy tale about the billy goats Gruff, collected and retold by Asbjørnsen and Moe. In this version we find many typical features from fairy tales, such as “Once upon a time …”, setting out on a journey, a confrontation and things that are repeated three times.

The billy goats are three adventurous brothers. The biggest is the most responsible of them. He has the parental role among the siblings, and draws the lines for what they can do, but he also tries to persuade his brothers to join him in his undertakings. In the pictures we see that he is sitting in his rocking chair doing some handicraft work, and that he is walking behind the other two when they are out and about. The middle billy goat is the most daring of them. He is ready to fight so that he can try out his horns which have just grown big enough. The smallest billy goat is sweet and innocent. He crosses the bridge first, and does not want to be taken by the troll. The pictures present him as the cute sibling, with pink cheeks, blue eyes and long eyelashes.

The book neither confirms nor challenges traditional gender norms. The main roles demonstrate clear gender roles. The goats are tough boys, but we also see that the biggest is doing handicraft work. The middle goat wants to be tough and may appear angry. The youngest is proper and timid. The book does not present gender as important for the behaviour of the characters, but rather for their place among the range of siblings. When it comes to the other characters, their gender is not important for their role in the story. 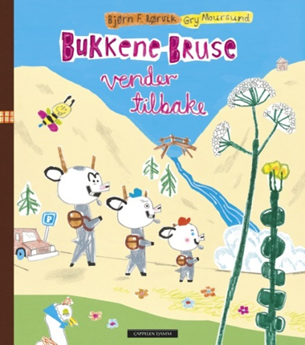