The book is about a cat and an electric car. The electric car does not enjoy the city much, so it travels into the world, finding a new place to be. It has a sharp colour. The cars on the street have all the colours of the rainbow.

There are not many clear indicators whether the car or the cat is a he or a she. This allows us to choose. The cat’s body language is, however, active and acting, hence coded in a masculine way. The men the car encounters have beards, but their clothing is red and blue and appears to be a kind of toga, and they can repair the car so he can use it for transport, another masculine code.
A quote: “And the cat narrates: … and the hotdog man was cute. Her name was Lise.” She is drawn with a chestnut-coloured page haircut and lipstick, large head and small arms, but she has a fairly firm grip on the hotdog and the mustard bottle. This is clearly a case of mixed gender codes.

One may state that the book in general then is not marked by gendered codes, and that it plays with the concept. One can claim that the theme of the book, as a point of departure, appeals to a normative view of what males would be attracted to, as cars generally are considered to be masculine objects.
In general one can state that the book is not dominated by gendered codes. The main characters, the car and the cat, are not gendered. Thus the reader can choose to identify with either of them whether one is a girl or a boy. One of the ways in which it is possible to keep a story gender neutral is to use animated animals as main characters, as the book here does. There are few indications in the book as to whether a character is a he or a she, and in the few places this is done it is playfully intended “… and the hotdog man was cute. She was called Lise.” 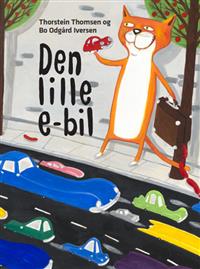