The book focuses on Karsten and Petra learning to ice skate, and first we follow Karsten who was given ice skates for Christmas, and his first time on the ice. Some of the things needed for children to go ice skating for the first time are described, as well as what is required in the local neighbourhood to prepare a skating rink. After the first trip on the ice with his big sister, we learn that Petra also got ice skates for Christmas when Karsten meets her on the first day in day care after Christmas. The remarkable thing is that Petra has been given hockey skates, and not figure-skating skates, which would normally have been given to a girl.

On the same day, Karsten’s family invites Petra and her mother for dinner and to join Karsten and his big sister at ice skating practice afterwards. All of Karsten’s family as well as Petra’s mother go to the skating rink, and the mother has even brought music. Petra lends Karsten her box (for support when ice skating), but Karsten has become so good at skating that he does not need it any more − he only needs his big sister’s hand. The same evening Petra also throws away the box and takes Karsten’s big sister’s hand, while Karsten receives help from his big sister’s friend, Fredrik. Petra brought her dog, Bassa, and the dog gets loose and steals the hockey puck from some boys who are speeding around to retrieve it. Everything ends well when Petra catches Bassa and the boys get their puck back. Later the family returns home, as it is getting late, and in the night Karsten dreams that he and Petra are a super ice-dancing pair!

The book is a sports book for children as it is about learning to ice skate.

The book tells a conservative story with common gender roles and responsibilities for family members – mother and father care for the children, big sister cares for little brother, and little brother has a girl as his friend. Nothing is more ordinary than this. In terms of equality the role pattern is traditional – not much is said about whether Karsten’s mother prepares the dinner, even if she is heard talking about what to have for dinner to Petra’s mother on the phone. Since the book is traditional, there is no equality in the book. The book focuses on a boy and a girl growing up, but the balance is in favour of the boy. It is not norm-critical, and deals with ethnic Norwegian customs. The book is rather gender neutral in the commercial market when it comes to choice of colours, as the friendship of a boy and a girl is in focus. The book is not marked as gendered and features both genders as main characters. The content of the book may be considered factual, as my assessment is that the book has good insight in teaching children to skate. The methods used in the book are those used in skating training in the Nordic countries to teach beginners to skate. 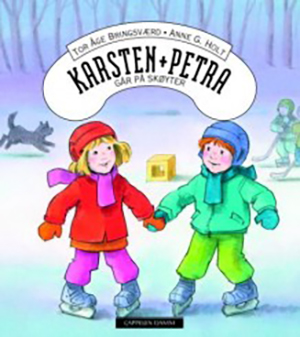