The students’ conclusion: Neither challenges nor confirms traditional gender norms

Søppelmysteriet is a picture book with a minimum of one picture per page and the text interacts with the pictures. The main character in the book, a monkey working as a police officer, is trying to find who has polluted his garden. The monkey appears as a somewhat egoistical character only interested in resolving his own problem, and who very quickly accuses others of the offence. The focus in the book is on how the main character is trying to find the culprit, while the other animals focus on another story, trying to help an animal whose head is stuck in a bucket. All the characters in the book are animals, with the exception of two children, a girl and a boy.

After analysing the gender norms in the book, we have found that the main character is independent, adventurous and resolute, but the emotions, thoughts and vulnerability of the monkey are not prominent. All the characters in the book appear to be on an equal footing regardless gender and role. They occupy equally large space in the book.

The other characters in the book appear as strong and helpful. There is no focus on the appearance of any character, as that is irrelevant within the story. The focus is friendship and conflict resolution.
Conclusion: A gender analysis confirms that this is a gender-neutral book, which neither confirms nor challenges the traditional gender norms. In our opinion this is a book with suitable excitement and a good moral. It has strong and comfortable colours which do not give any stronger focus on gender roles. The book also ends well, which we think is appropriate for children’s books. 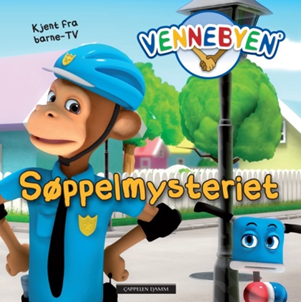