This is a picture book focusing on concepts. It deals with Lille Ting who is visited by her male cousin Tung and her cousin Trang. They go to the playground to play. They play football, skip rope, swing, slide, seesaw and play in the sandbox.

Lille Ting is a girl wearing a dress. Cousin Tung is large and wide, while cousin Trang is tall and thin. Their names in Norwegian reflect their appearance. This confirms gender norms in the sense that boys should be bigger than girls and girls should be small and light. When they race, cousin Tung is the quickest. Tung wants to play football, and he saves all the shots, while Trang does not save even one. This is a typical boy thing to master. Cousin Tung is unable to master skipping rope, but cousin Trang does. This is a typical girl activity. Moreover Tung is more ill-behaved than the girls, he wants to slide the wrong way and shovels the sand out of the sandbox. Trang is more whining and wimpy, she does not dare slide and she cries in the sandbox. When they return home Ting prepares food for them.

Two girls and a boy are featured in the book. According to the book’s title, Ting is the main character, but it appears as if the boy, cousin Tung, is given most space. He is mentioned most frequently in the text (Tung: 12 ;Trang: 10; Ting: 7). He and Trang are in the same number of pictures, 15 times (Ting 11 times), but as Tung is the biggest, he occupies most space in the pictures.
I find that this book generally confirms the traditional gender roles and gender norms. Tung does typical boy things and behaves like a typical boy – often in a negative sense. The girls are typical girls and behave as girls – also in a negative sense. The boy is more brutal and the girls are more wimps. Even if they play together, the gender roles appear clearly through the various qualities of the characters, in both the text and the pictures. 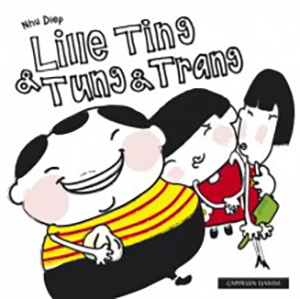