Check out: Are there other picture books or works of art that describe similar gender conditions?

Does the book tell us something about how it is to grow up as a girl or a boy in today’s and tomorrow’s society? Picture books are often highly sensitive to social changes, and the fortune teller has good knowledge and keeps abreast of how gender patterns in the family and society are developing. She or he sees and reads the picture book into a wider context. What does your picture book make you think of?

This picture book is about Garmann (Hole 2008), who dreads starting his first year in school. We follow Garmann during some peaceful summer days, where he is asking questions and talking with his family. Garmann shares his thoughts with us. He is dreading school. Is his mother dreading anything? What about daddy, and the old aunts, what are they dreading? There is no external action in the book, the drama is in Garmann’s thoughts, feelings and relationships to others. Garmann does not think that the twins he knows, who are also starting school, dread it. But there is some comfort in how everybody is dreading something. It is part of life.

Some of the striking aspects of the book’s text and pictures are how Garmann is portrayed as a cautious, sensitive and thoughtful boy. Applying the fortune teller reading strategy, we may ask whether this portrayal of a “sensitive boy” says something about growing up as a boy today. We may also ask whether there are other works of art with similar “sensitive” boys. 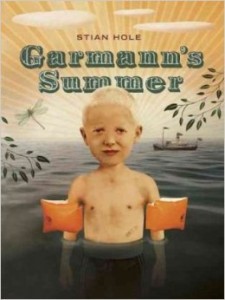 Garmann’s Summer is published in Norwegian, Swedish, Danish, Finnish and English. After Garmann’s summer Stian Hole has published two more books about the same sensitive boy. They are all very popular. Does Hole capture something essential about growing up as a boy in the Nordic countries? Have boys become more sensitive and relational, or is it now more accepted that boys may also dread something and be afraid? If we look more carefully, we see other picture books where the boy’s role has been softened, such as Odd er et egg [Odd is an Egg] (Aisato 2010) and En stackars liten haj [A poor little shark] (Sandén 2014).

Using the fortune teller analysis strategy, we may ask what gender research or social-science research says about the boy role as described by Hole. Previous studies describe the socialising of boys as dominated by hardness, aggressiveness, rebellion and poor social competence. A new doctoral degree thesis gives a completely different picture. This thesis examines boys in year 5 in primary school, and the interaction between these boys is described as friendly, inclusive and humorous. They also talk about their emotions. The boys with the highest status in the group were those who showed that they cared about how the others in the group were doing (Overå 2013). 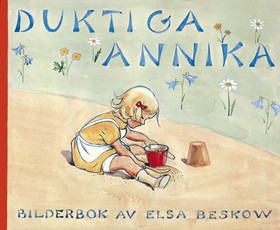 The picture book is highly sensitive to existing gender and social conditions. A look back at the children’s books of earlier times clearly shows us how the expectations for boys and girls have changed. From the children’s books in the mid-1950s we have several examples of the cultivation of the adventurousness of boys, while also nudging in the direction of cooperation and obedience, in accordance with contemporary male ideals and paid work. Children’s books also focused on how girls must learn to be clean, nice and careful – in line with the contemporary female ideals (Toijer-Nilsson 1978, Bache-Wiig 1996).

An example is the character Duktiga Annika [Clever Annika] in the book of the same name by Elsa Beskow (1941), a name which has been embedded in the Swedish language as the term for a dutiful girl.

How have authors and illustrators in the Nordic countries in recent years reflected gender and social conditions? We know that many authors and publishing houses are not averse to raising difficult issues, even for children younger than six. The issue of family violence is for example raised in a number of picture books, such as in Sinna Mann [Angry Man] (2003) by Gro Dahle and Svein Nyhus. We follow a boy in this book who is living with violence. In the text and pictures we witness the anxiety, fear, shame and isolation caused by violence. The book’s redemption is when the father receives help and takes responsibility for tackling his violent behaviours. Several new picture books thematise breakups in families, such as To af alting [Two of everything] (Kvist 2013) and Krigen [The war] (Dahle 2013).

Recently several picture books with alternative superheroes have also been published: Antboy (Andersen 2008), which has also been made into a film, Fladdermuspojken [The Bat Boy] (Hurme 2014) and Brune (Øvreås 2013).

A common feature of the superhero portraits is that the boys retain their vulnerability while also being superheroes. Thus the superhero books may be read in the context of the previously mentioned trend of relational boys’ books, rather than being an indication of the development of a harder masculinity. Some studies of children’s books have precisely this as their goal – to examine the various ways children, (Stephens 2002, Slettan 2009) boys and girls (Söderberg et al. 2013), do gender.

Learning from social and gender research

Social researchers and sociologists are the fortune tellers in real life. We can learn how these experts contextualise and systematize phenomena (whether in picture books, social developments or ways of being human), and how this is used to make descriptions of how society will develop.

There are many analyses that draw attention to the development of individuals and society, such as Ulrich Beck’s analysis (1986) indicating that we are now living in a risk society, and Michael Kimmel’s analysis of young men who delay their adulthood for a carefree type of entertainment world, a Guyland (2008). And many books of social criticism and popular science works try to diagnose the state of modern society.

The fortune teller analysis strategy concerns contextualising the development features you observe in the picture book, whether this may be the breakup of a family, relational boys or superheroes, by using gender and social research. This may help to more clearly expose the demands placed on girls or boys as they grow up in the modern world.