The students’ conclusion: Neither challenges nor confirms traditional gender norms

This is a picture book where the pictures illustrate the action and emotions, but not quite necessarily in interplay with the text. They more compliment the text, instead of having the pictures reflect the text, which is the norm for this type of book.

“It’s Nils’ birthday! And he knows just what he wants to get – the world’s finest Barbie, of course!”
His father promised Nils that he could wish for anything, so Nils is truly looking forward to playing with the nice Barbie doll he wanted. When his father finds out that he wants a Barbie doll, he looks around the room, slightly embarrassed, and tries to persuade Nils to ask for a toy pistol instead. This conflict is the main component in the book, where the father feels substantially weaker than other stereotypical fathers with sons who want a baseball bat (or pistol) as a gift.

This is a double conflict, as one conflict concerns how Nils wants a Barbie doll, his true wish, while his father does not want this for his son. The other conflict is the father’s struggle within himself, caused by his idea of how an ideal father should be. This second conflict is more hidden, but at the same time it is also the more prominent one. The illustrations in the book show the father as physically small compared to the other stereotypical fathers. It illustrates the father’s inferiority complex and how he wants his son to fit in, instead of accepting Nils’ individuality and giving him full support.

Nils deals with this conflict resolutely. He is a “proper” boy who remains steadfast in his demand that his father should satisfy the promise he made, that Nils could choose whatever he wanted for his birthday. In spite of his father’s attempt to negotiate, make a deal with him and use other methods to get his way, Nils does not budge.

This changes when the father says that he can buy the pistol for Nils because “everybody has to listen to the person with the pistol”. When Nils hears this, he immediately agrees, they pay for the toy pistol and leave. Then he starts playing with the pistol with his father, and finally Nils points the pistol at his father and says “Now I want you to buy me the Barbie doll!” Having already stated that the person with the pistol decides, the father is forced to keep his promise. After all, Nils had bought the pistol his father wanted him to have (an attempt to “save face”?).
The book ends with Nils in the living room at home playing with his Barbie doll. The father passively participates in the play, even if he was against the Barbie doll earlier. In the book Nils develops from being a timid and quiet boy, a “victim” in a conflict that is not of his making, into a self-confident and expressive boy. 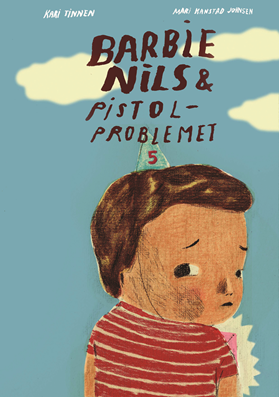