Mopp og Mikko elskar kjøretøy by Kari Stai is a picture book for children aged one to three. It has a square format and is designed for children to point at things in it. The children can point to pictures of boats, tractors, helicopters and aircraft. It is similar to pointing books which toddlers have in day care. It is about a girl who invites a boy to go looking for vehicles. They collect aircraft and helicopters from the sky, and other vehicles such as bicycles, tractors, cars, buses and prams from the dock.

The main characters: The boy is the brave and tough one, while the girl is more timid and withdrawn. Both are adventurous. The girl is passive in the story and allows herself to be directed by the boy. This book only presents the happy feelings of the main characters. They become happy when they see various vehicles such as a tractor or helicopter. It is important that the characters show joy when playing. If they were not happy, it may be that the children who were reading the story would not have played with these “toys for boys” (tractor, helicopter, bus, fire truck). Therefore, the feelings of the characters are important. The girl is neither ugly nor pretty. This being a game for boys, she does not need to be so sweet. The boy is the sweetest person in the story.

The book confirms the traditional gender role pattern, with the boy as the strong and brave one, while the girl is more passive, shy and withdrawn. She is not so independent in the story; mostly she does what she is asked by the boy. She generally acts as society expects: she behaves nicely, properly and politely. What is good about her is that she takes the initiative for games. For example, she starts the book by saying to the boy: “Come on, let’s go look for vehicles”. She is an ordinary girl. We see that she is wearing a dress, so she is not a tomboy. The boy is not feminine; he is an ordinary boy who likes to show that he is the boss. He directs their playing. The book, on the other hand, does not confirm the entire traditional gender role pattern because the girl plays with toys for boys, such as helicopters, tractors, cars, fire trucks and aircraft, which all look quite ordinary (i.e. they have not been made feminine). Some may perceive a girl playing with a tractor as something out of the ordinary.

The girl in this story is neither pretty nor ugly, but she is nice. This is not a case of the pretty girl in the story being the good one, while the ugly girl is the nasty one (as it is in Disney animated films/comics such as Ariel, Snow White and Cinderella, where all the good-looking girls are good, and the other girls who are not pretty are nasty). This is a positive thing about the book, because it is important to show the children that one may be good even if one’s appearance is not “pretty”. 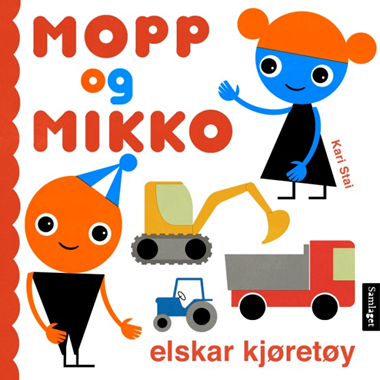