[Odd is a normal male name in Norwegian, without the connotations the name has in English] The book is about a boy called Odd, whose head is an egg. Odd is quite worried that his head will be crushed, and this dominates his everyday life. At school he does not dare to play because he is afraid his head will be crushed. Finally in the book he meets the girl Gunn, who is a bee and who is not afraid of anything and full of activity and excitement. She makes Odd join in things he never dared to do before. Odd falls in love with Gunn, which makes his head hardboiled. Thus he can play like everybody else without being afraid his head will break. In the end Odd has become a tough boy, who dares to do most things. This is a picture book with a multimodal form of expression in text and pictures. For small children who cannot read, looking at the pictures will provide much meaning. Each page has clear and large drawings with little text. Most pictures appear inviting, but some are slightly sad and dark. The text relates much of the boy’s feelings, and they correspond to the pictures.

If we look at the gender patterns in the book, we see that Odd who is the main character, is not a typical boy character who is strong and brave, as we recognize from the traditional gender norms in society. He is drawn in a humorous manner by having a head which is as large as and shaped like an egg, representing his worry about his head. He appears to be a wimpy and uncertain boy until he meets his counterpart, the girl Gunn, a bee. She is one of the subordinate characters in the book, and is no typical girl character. She is neither pink nor saccharine, but has a rather untraditional appearance. She enjoys tough boy-like things, such as jumping and climbing high. In the book Gunn is the heroic character who helps Odd to emerge from his shell and become a tougher boy. Finally Odd becomes the traditional boy, as it were, tough and self-confident, as we usually see boys in most traditional gender role books. Odd’s mother plays a subordinate character, and she is no ordinary mother. She appears to be a hen without typical female characteristics, which makes it difficult to ascertain whether she is a woman or man.

Conclusion: We may conclude that the book challenges the traditional gender norms. None of the characters in the book are depicted as typical girl or boy characters, as we are accustomed to see them in many of the typical traditional children’s books. The drawings in the book are neutral, and the colours used are not traditional boy/girl colours. Odd is no ordinary boy, he is rather humanoid. Thus we may conclude that the book per se challenges the traditional gender norms.
Student of early childhood education at Oslo and Akershus University College 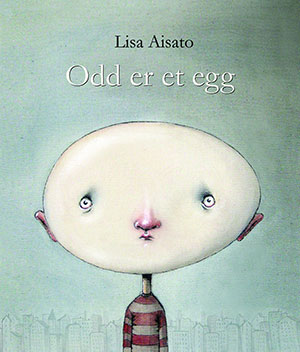